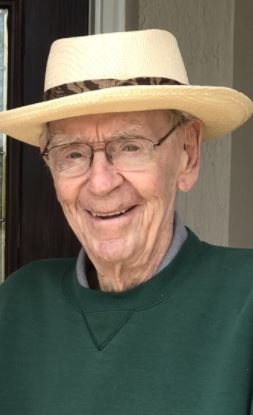 James Franklin Smith passed away on October 19 at the age of 92 after a few weeks at the Superior Residence, attended by Hospice of Marion County. He was born on April 14, 1928 to the late Walter and Helen (McCleary) Smith in Hagerstown, Maryland.   He enlisted in the Marines in March of 1946 during World War II and served state side as Corporal until his honorable discharge in December of 1947.

He is survived by his wife Evelyn Diebert Smith for 58 years, and a son Mark (Deborah), eight grandchildren, and 10 great grandchildren. He is preceded in death by a son Eric Smith and a daughter Nancy Barnhart.

He was a member of the First Baptist Church of Ocala. He was an avid reader and enjoyed teaching Sunday School classes at First Baptist Church. He loved participating in the weekly Bible Study Fellowship, and later, the Community Bible Fellowship. His hobbies were playing music and attending the NFL Washington team games. He led his family on numerous camping trips visiting many of the national parks across the country.

A private burial service will be held at Bushnell Veterans Cemetery, at a later date.

Memorial contributions may be made to Hospice of Marion County, or the First Baptist Church of Ocala.

Share Your Memory of
James
Upload Your Memory View All Memories
Be the first to upload a memory!